The phases of the moon describe the harmonic cycle as the Moon goes from new moon to new moon. This is sometimes referred to as the synodic period, and takes a little over 29 and a half days (29.530589 days). During this cycle, the moon usually goes once around the zodiac, and continues approximately one sign further than it started by the time it returns to the same phase.

Many people use the lunar cycle and its journey around the zodiac as a personal passage or growth cycle, starting with the new moon.

The first half of the moon's cycle is the waxing cycle. This is the more auspicious time for activates and choices that focus on starting, growth, expansion or accumulation. Traditional, farmers that paid attention to the phases of the moon, would plant at this time. One thing to remember when staring something new during the waxing cycle, is to avoid the first 2 or 3 days of the cycle, because it tends to be a less grounded time. You might say the Moon is too new.

The second half of the moon's cycle is the waning cycle. This is a time that is more auspicious for activities and choices that focus on decreasing, getting rid of, clearing, letting go or ending. Traditionally, this is when farmers would harvest, or weed. The last 2 or 3 days of the waning cycle also tends to be less grounded, and not the best choice for staring a project.

The Basis of the Phases

The most popular phases of the moon are based on division by 8. These are the phases seen on calendars, and include the New and Full Moons and Quarter Moons on newer calendars, and additionally, the Crescent and Gibbous Moons on older calendars.

When you superimpose the two systems, the result is 16 phases, which alternate between times of greater and lesser tension. Most people are aware of the popular association of the full moon with more excitement or tension, as well documented experiences of emergency wards in hospitals and work load for police departments. The quarters and new moons also exhibit some of these characteristics to a lesser degree, and to some extent, the Crescent and Gibbous Moons. This is one reason why they were indicated on calendars.

Between each of these somewhat more tense times, are the easier or more harmonious moon phases, of the semisextile, sextile, trine and inconjuct. 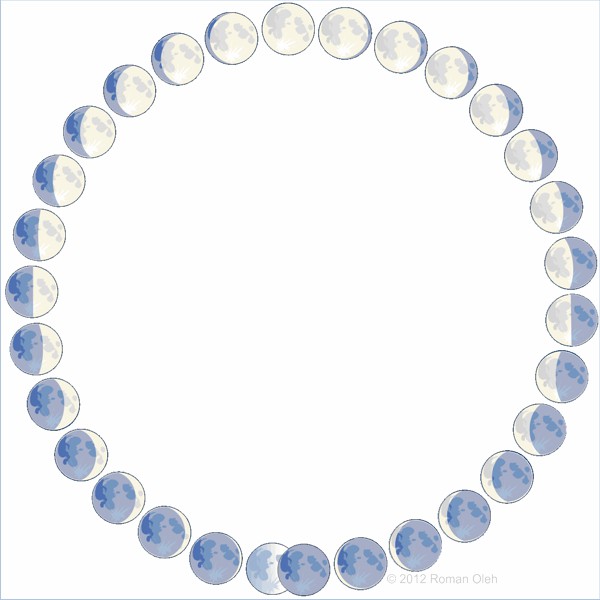